I want to have a talk about something that’s not Real Estate or Property related but it’s linked to humanity and our country, and I honestly believe our government are not doing enough and I don’t think that many of us are right now.

Don’t get me wrong I am all about supporting charities overseas and fundraising for overseas communities, and I personally have been involved with World Vision for years along with other charities along the way, but nothing has affected me more than what is happening in our own backyard.

In July last year my family and I headed off through Northern NSW through Dubbo, Coonabarabran, Narrabri, Walgett and out to Lightening Ridge then up through the centre of QLD namely Roma Emerald Claremont and up to Charters Towers. When we finally headed across to Townsville we have never been so glad to see the coast with all of its water and all of its greenery we could finally get the dust out of our system and out of our clothes and our caravan, and it had only been 4 weeks.  Imagine our poor farmers, some have felt like this for coming close to 8 years!

So from this trip, we became friendly with one family in particular from a property outside of Lightning Ridge on Carinya Station . When Jacinda and Jo bought Carinya back in 2012 it was green with flowers and an abundance of grass with plenty of feed for their thousands of head of cattle, it now has no cattle after they made the decision to sell their stock very early on and they both have to work off the property in town to make ends meet on the farm.  They were finding it incredibly isolating and desperate, but they were lucky they could head into town to find work. Many towns aren’t so lucky and they are doing this with 3 small children all under 6 who have actually never seen rain!

This year when we headed off first stop Roma before we headed West to Birdsville we could see things were even worse! By the time we got out to Yowah (which is 1000km directly West from Brisbane) we could see it was grim. The population has shrunk and it was already tiny. They have even closed the local primary school as there are no longer kids living in their town or even close by… IMAGINE towns without kids!

Our last real stop in QLD was Cunnamulla.  We had a great time here swimming in artesian bores which were 40 degrees all coming up from the depths of the earth called the great artesian basin. When we met the station owner Robyn this station is 29000 hectares which to put into our terms is half the size of Singapore! Robyn is a woman in her 70s who lost her husband a few years ago, if it wasn’t for the working holiday visa farm workers she wouldn’t have any staff on her property as she can’t afford to pay them what they would want. She has gone from having 4000 head of sheep to only 1000 and Robyn hasn’t sold them, they have all died from starvation. The bore water that comes through from underground can water livestock but due to the minerals in the water you can’t use it for feed and feed costs her around $20,000 every couple of months.  She doesn’t have the money to keep doing this!

I could go on and on about the stories we heard whilst we were travelling and they will absolutely break your heart; suicides of husbands and fathers who feel like failures and families having to let their farms go to ruin to move towns for work just to keep their families fed.  This isn’t in a third world country but not too far from our own homes!

My children, as well as my husband and I, were so upset to see the death of animals on these farms, paddocks and paddocks of that you think are white rock when you look but when you go up close you realise its paddocks and paddocks of bones where livestock have just dropped dead! Many dead cows, goats and kangaroos dead by the side of the road where they have walked to the ditch to eat green grass but the side of the road but never had the strength to get back up the embankment so that is where they fall!

I believe each and every one of us can do something small to make a difference to our farmers lives and that can be by buying only Australian produce or by some of the small steps that I have for you next!

My businesses and my teams have decided that we want to make a difference this Christmas. Imagine not being able to give your children little cakes and snacks to make them smile but even worse what if you couldn’t afford toothpaste, toilet paper! Many go without simple things like pencils, colouring books and craft items to amuse them in their down time when they are hundreds of kilometres from the nearest playcentre or town! We are asking you to donate items that we can send for distribution to our farmers this Christmas. We ask that you either organise to get some of the items on this list to our offices or perhaps if you have a large amount we can arrange to collect them from you. Every little bit counts and I truly hope that we can help our outback heroes in this small way! 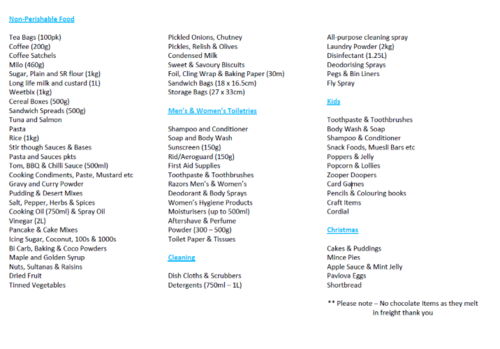